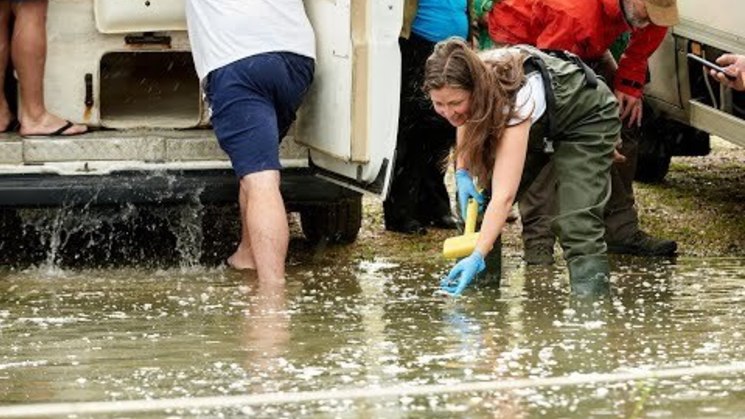 Beluga sturgeon are swimming down the Danube!

Fantastic news! Thanks to your support, thousands of young, healthy Beluga sturgeon are swimming down the Danube towards the delta. The release went very smoothly with all the sturgeon being safely transported from the hatchery and transferred into the river. Watch the great video to see over 7000 sturgeon being released into the river - something that was only possible because of the support of so many people in the Netherlands, Austria and across Europe.

Initially, we had hoped to release more sturgeons but - as with so many things - the Covid-19 crisis impacted these plans. The hatchery usually separates Beluga sturgeon on an ongoing basis as they are aggressive predators and do eat smaller sturgeon when they get to a certain size. But due to Covid-19 restrictions, the hatchery was understaffed and was not able to separate the sturgeon as they usually do - so the final number was less than anyone expected. We apologise for not updating you before but we had no idea that the impact of Covid-19 restrictions & the hatchery's inability to follow normal procedures would be so severe.

But there is a real silver lining to this - the surviving sturgeon are also much larger, fitter and stronger than anyone expected and they will have a much greater chance of avoiding predators and surviving to breed now they are back into the wild. And the survival of every fish is vital as Beluga sturgeon are critically endangered.

As our colleague, WWF-Bulgaria’s Stoyan Mihov said as he stood in the Danube after the successful release:

“Watching thousands of strong young sturgeon swimming off into the Danube was an extraordinary experience. These fish will now head for the Black Sea, where they will grow into some of the biggest freshwater fish on Earth – and help replenish one of the last naturally-reproducing populations of Beluga sturgeon in the world.”

And another colleague, Iain Jackson, WWF Bulgaria's Conservation Director, echoed what we all feel:

“The incredible response to our crowdfunding campaign and the interest of Danube communities in the release shows how concerned people across Europe are about the survival of sturgeon. Releasing thousands of young sturgeon is a huge boost to the survival of this iconic species."

Thank you so much for your support. If you have any questions, please ask info@wwf.nl

In the meantime, enjoy the video of your sturgeon starting their life in the Danube!