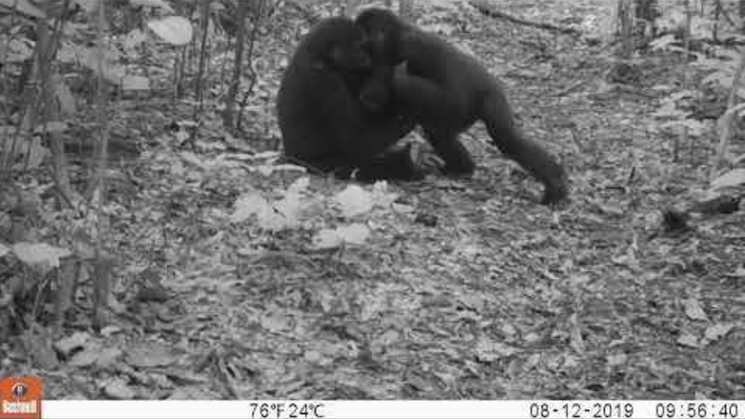 In the footsteps of the indigenous Baka

But first…
The trip from Yaounde to Pondo Bai in Boumba Bek National Park is not for the faint-hearted. It takes two full days of driving on red dirt roads to reach the park. When we finally start our hike through the jungle it’s pitch dark. We cross the murky Bek river in a hand carved canoe, which the skipper steers effortlessly across the rapids. I try not to think about the Nile crocodiles, who call this river their home.

Pondo Bai
On the other side, the WWF team lead - a young woman named Darline, welcomes me to the Pondo Bai permanent biomonitoring post. This camp was established in response to the rapidly declining forest elephant numbers in the park. Thanks to the kind support of Dutch individuals participating in a WWF-NL crowdfunding event, the local team was able to react and establish a permanent presence in the park. Since three years, there is a team of WWF staff, local community members, Baka indigenous people and government employed eco-guards patrolling the park and collecting wildlife data.

Boumba Bek is home to extraordinary wildlife
Next morning we set off to track wildlife. Nothing really compares to the thrill of tracking western lowland gorillas, forest elephants, leopards and much more in one of the richest rainforests in Africa.
As we’re making our way through the forest we see forest buffaloes, red river hogs, crowned and putty-nosed monkeys, grey-cheeked and agile mangabeys, black-and-white colobuses, yellow-backed duiker and many other animals.
I stick close to our Baka guide…

The Baka
The Bakas are indigenous people living in the tropical forest of the Congo Basin. The Baka are the real scientist of the forests. They know these forests better than anyone - they can recognize animals by the smallest sound and they know exactly where animals travel and when - including where to find elephants, chimps, monkeys and gorillas.

Unfortunately, these skills haven’t gone unnoticed by ivory traffickers. Capitalizing on the Baka’s knowledge of the forest and poor socio-economic status, traffickers have been increasingly drawing them into the global ivory business. In exchange for small money or a token, the Baka become poachers and collect the ivory for some big somebody far away…

Luckily not all engage in illegal activities as proven by the communities around Boumba Bek. The Baka are excellent custodians of these forests and WWF is committed to working with them for better conservation outcomes.

Forest Elephants
We do not see elephants during the five days in the forest. In just 4 years’ time, between 2011 and 2015, Boumba Bek lost 90% of its elephants due to poaching, leaving their numbers at mere hundred individuals. African forest elephants have an extremely low birth rate. Even under best conservation practices it will take decades until we can see their numbers increasing. Combined with their notoriously shy character, it’s hard to predict how long it will take until we can see them roaming around Boumba Bek again.

But there’s hope
Although the elephant numbers show no signs of growth yet, Darline and her team leave me hopeful. The health and well-being of local indigenous peoples is directly linked to the health of forests and biodiversity. Therefore, these type of collaborations between indigenous people, local communities, government officials and conservationists are critical to protecting the last remaining wild places.
And as seen in Pondo Bai, which has been made possible thanks to our Dutch supporters, together with our supporter we are truly a vital force.

And as our Baka guide says: “We go to the forest to look after the animals, so that our children could see them too.”